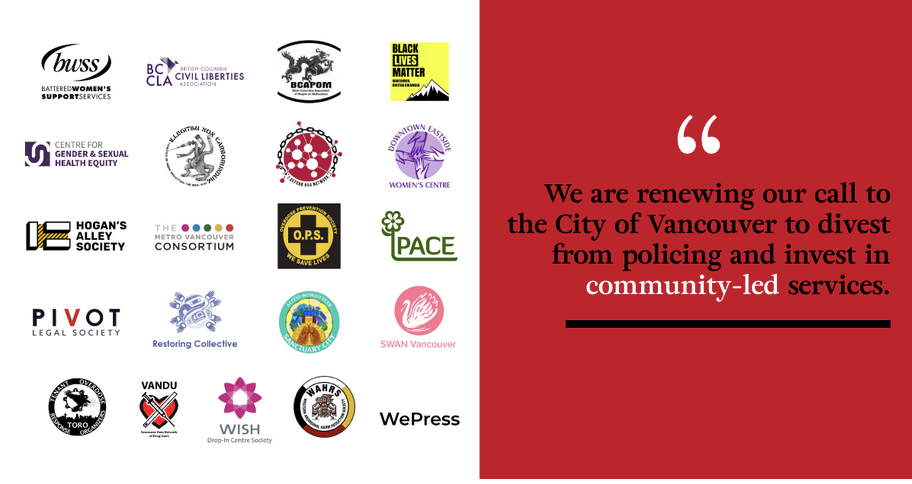 This open letter to the City of Vancouver, signed by 21 community organizations, calls on City Council to divest from policing and invest in community-based services, specifically non-police interventions that support people who rely on public space and who are impacted by homelessness, toxic drug supply, mental health distress, and those working in informal economies and criminalized industries, such as sex work.

We write to you as representatives of community organizations, including organizations identified in the July 2020 Motion Decriminalizing Poverty and Supporting Community-led Safety Initiatives1 (“the Motion”). We are renewing our call on the City to divest from policing and invest in community-based services, specifically non-police interventions that support people who are impacted by homelessness, toxic drug supply, mental health distress, and those working in informal economies and criminalized industries, such as sex work.

This motion recognizes that many groups, organizations, and individuals in the City already have the skills and abilities to lead community-led safety initiatives. The expenditures associated with this Motion, and future related work, must be made available to directly-impacted groups and organizations and supported with transparent reporting, including line item details. The work of decriminalizing poverty, defunding police, and investing in community-led safety initiatives remains an urgent priority for our organizations. In December 2020, Council further approved funding related to this motion, costed at $300,000, as part of the initiative to “Increase Focus on Equity and Critical Social Issues.”2

Despite ongoing actions that call attention to the importance of disarming, defunding and abolishing police, our organizations have yet to hear from City Hall regarding how the funding allocated for this work will be disseminated. This work must proceed quickly – the reality of police brutality and police killings has not ceased, including in the City of Vancouver.

Although the Decriminalizing Poverty Motion was approved last year, there have been multiple initiatives from the Vancouver Police Department that contradict Council’s stated commitments. This includes the deployment of the Neighbourhood Response Teams3 initiative and the creation of the Trespass Prevention Program4, and most recently, news that a wealthy donor has earmarked $100K annually to “provide additional resources to VPD officers who are dealing with individuals in crisis due to mental health or addiction issues,” as outlined by Vancouver Police Foundation executive director Andrea Wright.5

These initiatives and investments flout efforts to decriminalize poverty, and instead design new pathways to criminalization, particularly for people who rely on public space. Furthermore, since the Motion was passed, there have been multiple police-involved incidents of serious harm or death, based on reports from the Independent Investigations Office of BC, the civilian oversight agency of the police in BC. There have also been multiple high-profile incidents of police misconduct, subject to investigations by the Office of the Police Complaints Commissioner.

The harms of policing and criminalization include lasting physical, emotional, social, and psychological impacts. During 2020 Budget Proceedings, numerous speakers sought to highlight the harms of criminalization and the lasting impact of police violence – particularly for Black and Indigenous communities, unhoused neighbours, sex working communities, and people who use illicit substances.10, 11

The City of Vancouver has the opportunity to support initiatives that augment the role of community-based crisis response. In addition to transparent data and budgets, the City must design permanent funding for programs that prioritize this work as part of the path to defunding the police. The funds to support this work are available if Council defunds the VPD in its 2022 budget.12 Many of these programs already exist, but organizations must continuously expand and stretch their mandate and services with a fraction of what the municipal police force receives annually. While Council voted to freeze police expenditures at 2020 levels, there has been no clear response from the Vancouver Police Board. We continue to advocate for the importance of redirecting public funds towards directly-impacted communities.

In conclusion, we emphasize that we are calling on the City of Vancouver to:

BC Association of People on Methadone

The following motion was unanimously approved by Vancouver City Council at the July 2020 Standing Committee of Council on Policy and Strategic Priorities meeting.13

FURTHER THAT Council direct staff to report back with proposed recommendations for the aforementioned written submission in Q4 2020 or at a time determined after consulting the Parliamentary Committee Office regarding deadlines for written submissions.