AESHA is a community-based research project that includes a quantitative cohort and qualitative/ethnographic arm. As part of the quantitative arm, AESHA operates a community-based prospective cohort that involves semi-annual questionnaires and sexual health research visits with our community-based staff. The qualitative arm is focused on documenting the lived-experiences of sex workers of all genders, and third parties who provide services for sex workers (e.g. receptionists, venue managers, owners and security personnel).

AESHA operates out of our community-based research site as well as through weekly outreach across Metro Vancouver. On outreach, our multi-lingual team (English, Mandarin, Cantonese, French) conducts research and provides support to indoor- and outdoor-based sex workers across diverse work environments. Since the project’s inception, current and former sex workers are engaged and employed through all stages of the project including as interviewer/outreach workers, sexual health nurses, coordinators, researchers, and co-authors.

AESHA has produced a large volume of peer-reviewed evidence and legal/policy interventions and changes. Early AESHA work (2010-2015) led to a Lancet series paper on Sex Work and HIV, over 30 peer-reviewed academic publications which were submitted as expert evidence to the BC Missing Women’s Commission Inquiry, and a legal intervention by CGSHE and the Canadian HIV/AIDS Legal Network in the Bedford vs Canada case at the Supreme Court of Canada, in addition to various submissions to the Department of Justice, the Canadian Senate and Amnesty International.

Over the past 5 years, the AESHA project focused on evaluating the impact of evolving legislative approaches to the regulation of sex work including the Canadian ‘end-demand’ laws (The Protection of Exploited Persons and Communities Act, PCEPA) on sex workers’ health, safety and human rights. This research has been shared in 38 peer-reviewed articles and a recent report on the harms of end-demand legislation, which our team submitted to the federal Department of Justice and all MPs and Senators. Our team also  leveraged AESHA findings in a submission to the Committee on the Elimination of Discrimination Against Women (CEDAW) of the United Nations Office of the High Commissioner on Human Rights calling for an end of the conflation between sex work and sex trafficking.

Research Objectives: The current overarching objectives of AESHA are:

Our most recent newsletter | Sign-up to the Aesha newsletter

The Harms of Policing & Criminalization for Sex Workers Who Use Drugs 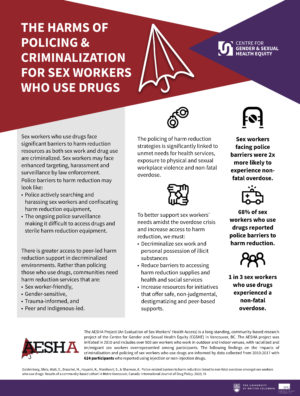