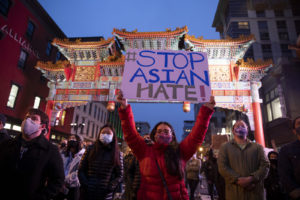 In the wake of the violent murder of eight people – almost all Asian women working in massage parlours – in Atlanta, Georgia this week CGSHE stands in solidarity with the victims’ families and sex worker communities. These violent executions need to be understood in the context of the criminalization and stigmatization of sex work as well as restrictive immigration policies and the racialization of Asian women. We call for the immediate, evidence-based full decriminalization of sex work to end the racialized violence and stigma that many sex workers experience every day in the form of targeted policing under the guise of protection.
Only the full decriminalization of sex work can hope to prevent such senseless, hate-filled and avoidable acts of violence in the future and ensure that sex workers experience the same rights and protections as all workers in Canada. We urge the Canadian Government to take decisive action and repeal all sex work laws immediately and engage instead in an evidence-based law reform process that centres im/migrant and racialized sex workers’ expertise, experiences and perspectives in a labour and human-rights based approach.
We want to express gratitude to CGSHE’s AESHA team, who have been reaching out to our massage parlour partners and sex work colleagues/massage parlour managers in Vancouver to check in as well as fiercely writing op-eds and engaging in media to counter the anti-sex work and racist narratives in the corporate mainstream media and public. Thanks also to our sex worker partners, including SWAN and Butterfly for their ongoing advocacy for im/migrant sex workers.
Check out the first of the AESHA team op-eds published in the Globe and Mail: If sex workers are as ‘vulnerable’ as the law suggests, where’s their pandemic support?
PHOTO: Tyrone Turner / DCist/WAMU